The symptoms typically include abrupt piercing pain in the Achilles tendon that is often described as if being struck physically by an object. There is a perceivable snapping noise that can be heard. There is a gap of 4-5 cm in the tendon that can be felt that is usually less obvious later as the swelling becomes prominent.

After a short time while, the individual might be able to walk again but lacks power to push off using the affected foot. There is significant loss of strength in the affected leg while and inability to stand on tiptoes. There is significant inflammation around the Achilles tendon and there is a positive result when Thompson’s test is performed. Take note that this is vital in confirming a diagnosis. 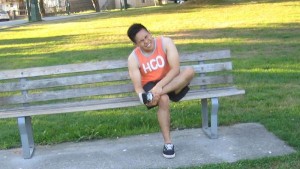 The symptoms typically include abrupt piercing pain in the Achilles tendon that is often described as if being struck physically by an object.

A full rupture is quite common in men than women. The injury typically occurs 30-40 minutes into a period of exercise rather than at the start and almost always occurs from abrupt movement or bending the foot upwards. Many individuals can still engage in activity after a rupture of the Achilles tendon since the other muscles compensate but the affected leg is significantly weaker.

If a full rupture of the Achilles tendon is suspected, you have to utilize cold therapy and compression and then seek medical care as soon as possible. If you want to learn more on how to effectively provide cold therapy, register for a first aid class. (Read here for more information on the classes offered).  In most cases, surgery is needed and the sooner it is performed, the higher the chances for success. In case the injury is left longer than two days, the chance of a successful outcome is reduced. Remember that cold and compression can be applied during the rehabilitation phase since swelling is likely to be an issue in such injuries.

The doctor will request for an MRI to confirm a diagnosis and indicate the severity of the injury. Oftentimes, the affected leg is placed in a cast and allowed to heal without surgery. Take note that this is generally not the preferred method, especially for active individuals. Surgery is the most common form of treatment for an Achilles tendon rupture.

The individual could not engage in sports for 6-9 months after the surgery. This can extend up to 12 months if the ankle is immobilized using a plaster instead of undergoing surgery. In addition, there is a higher risk for re-injury if the individual will not undergo surgery.