Anaphylaxis is a severe allergic reaction that is life-threatening. Always bear in mind that anaphylaxis is a medical emergency and entails immediate treatment. The symptoms typically include breathing difficulty and abrupt drop in the blood pressure that can cause dizziness or fainting. A raised itchy rash develops after the other symptoms manifest or at the same time.

What happens during anaphylaxis? 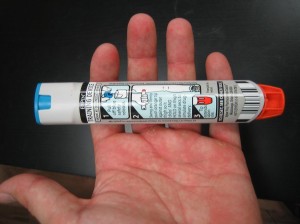 The initial line of treatment for anaphylaxis is the administration of epinephrine that is given intramuscularly into the upper outer thigh muscle.

What are the common causes?

The usual causes of anaphylaxis include certain foods including tree nuts, peanuts or shellfish. Just remember though that all foods can potentially trigger a reaction. In addition, insect stings, drugs and contrast agents are also common causes.

An allergic reaction is considered severe if it involves the lungs or affects the heart rhythm or blood pressure. Nevertheless, if an individual develops abdominal symptoms such as vomiting after an insect bite, this can rapidly lead to anaphylaxis. All or any of the following symptoms might be present:

There are also several factors that can affect the severity of the allergic reactions as well as increase the risk for anaphylaxis. These include alcohol, heat, exercises, amount of allergen exposed to and how food was prepared and eaten. In addition, those who have underlying conditions face a higher risk for severe reactions.

Who are at risk of anaphylaxis?

Unfortunately, there is no test that can accurately predict anaphylaxis, thus an allergist should be consulted. Remember though that anaphylaxis is more likely to occur in someone who has:

The tests that are commonly used to help diagnose an allergy can reveal how likely an individual is allergic but not the severity of the reaction.

The initial line of treatment for anaphylaxis is the administration of epinephrine that is given intramuscularly into the upper outer thigh muscle. This is considered as a safe treatment that works within minutes to reduce swelling, wheezing as well as improve the blood pressure.