Near-drowning is defined as a survival event that occurs at least 24 hours following submersion in water which caused respiratory arrest. The most frequent and common consequence of this environmental emergency is hypoxemia. Drowning is the second most common cause of accidental death in children below 12 years of age. An estimated 8,000 drowning and 100,000 near-drowning incidents occur in North America alone and more than 150,000 cases are recorded worldwide.

The most common factors associated with drowning and near-drowning is alcohol intoxication, unskilled swimmers, diving injuries, exhaustion and hypothermia. Efforts to save the victim should not be prematurely abandoned with the use of continuous cycles of CPR until emergency rescue arrives to take over. Successful resuscitation, with full recovery from possible neurologic impairment is very possible even with near-drowning patients following prolonged submersion in cold water. This is possible because of the inherent metabolic survival process of the body when faced with an imminent threat of drowning.

The near-drowning process normally involves the onset of hypoxia, and cardiac dysrhytmias. If violent struggle is suspected with the near-drowning incident, exercise-induced acidosis and tachypnea often happens soon after aspiration. Hypoxia and acidosis can lead to eventual loss of consciousness which is universally characterized by making a final effort to breathe (known as the terminal gasp) before the airway finally takes in water prior to death.

If successful resuscitation is done, the two primary complications faced with near-drowning victims are hypoxia and acidosis; which are life-threatening conditions that must be corrected immediately. The resulting pathophysiologic changes regarding the pulmonary injury greatly depend on the type of water environment the victim nearly drowned (salt or fresh water) and the volume of water aspirated.

Fresh water aspiration usually results in loss of pulmonary surfactant and therefore makes the lungs less elastic and unable to fully expand during respiration. On the other hand, saltwater aspiration (due to its high salinity) leads to pulmonary edema due to the osmotic effects brought about by shifting of fluids in-between the pulmonary tissues and interstitial spaces.

Therapeutic goals for near-drowning victims include an adequate maintenance of cerebral perfusion and adequate oxygenation to prevent further damage to the vital organs. Prompt cardiopulmonary resuscitation is the most essential influence for survival. The most vital priority in resuscitation is managing hypoxia, hypothermia and acidosis. 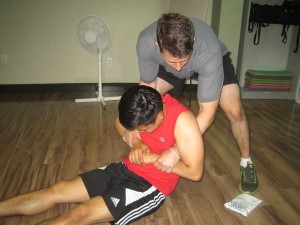 oxygenation is maintained (which can significantly improve proper ventilation which helps correct respiratory acidosis) by constant ventilator monitoring. Moreover, if the victim is able to breathe spontaneously, supplemental oxygen can be administered via face mask.

If the victim was submerged for several hours prior rescue, the victim is considered hypothermic. Emergency procedures involving near-drowning incorporates re-warming protocols which are immediately and simultaneously done upon resuscitation. ECG monitoring is also initiated in order to monitor for any cardiac dysrhytmias and an indwelling catheter is inserted to measure urine output since hypothermia and acidosis can severely compromise renal function. Also, nasogastric intubation may be done in order to help decompress the stomach and to prevent the victim from aspirating his/her own gastric contents.