famous movies where a shark attacks causing shark bites and more serious attacks. According to International Shark Attack File, there are about 100 reported shark attacks, with only 10 to 15 as deemed fatal. Of the hundreds of shark species identified, only a fewdozens are considered dangerous.
Most of these attacks are due to mistaken identity, wherein sharks mistake humans for their normal prey, such as seals or sea lions. Other times, shark bite injuries are provoked attacks.

The three types of shark attacks are hit-and-run, bump-and-bite and sneak attack. Hit-and-run is the most common type of shark attack. Though the other two are less common, they are the more severe shark bite injuries, which may lead to death

Because most people do not know when there is a shark close, the only warning received from shark is the bump.

How to apply first aid in shark bites

It is necessary to provide treatment for shark bites victims as soon as possible. First aid may be applied to victims of shark bite attacks, especially while waiting for the paramedics to arrive or on the way to the hospital. 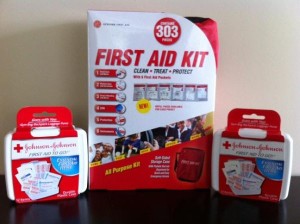 Oftentimes, sharks are very much feared by humans. Although there are not many shark attacks, they can be fatal. Shark bites, and many other different types of puncture wounds, can be treated by learning adequate knowledge from attending first aid classes. Moreover, CPR classes are also offered in case shark bites turn into emergency scenarios.

The information posted on this page is for educational purposes only.
If you need medical advice or help with a diagnosis contact a medical professional