It is a known fact that mosquitoes can pierce the human skin and feed on the blood. Aside from feeding, they also deposit saliva into the skin that triggers a response from the immune system. Mosquito bites can cause swelling, redness and itchiness in the area of the bite that can manifest two days after. Mosquitoes can also transmit serious health conditions such as malaria, West Nile virus and dengue fever. Early treatment can manage the symptoms and minimize the complications linked with mosquito bites.

You can apply an ice pack or package of frozen vegetables on the site of the mosquito bite since it can help ease the symptoms. Take note that ice works by numbing the skin which helps reduce the urge of the individual to scratch the affected area. The ice must be applied over a clean towel or cloth for 20 minutes and then removed for another 20 minutes to prevent frostbite. The procedure can be repeated as often as possible until the symptoms subside. Heat should not be used since it will only increase the swelling, redness and itchiness on the site of the mosquito bite. 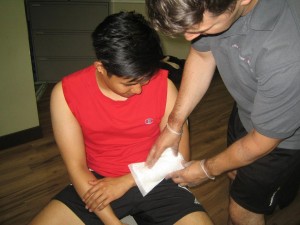 You can apply an ice pack or package of frozen vegetables on the site of the mosquito bite since it can help ease the symptoms.

Using hydrocortisone cream can prevent the individual from scratching the mosquito bites in order to avoid the development of a bacterial infection on the skin. Additionally, this medication can also be used as often as directed on the medication label. It is best to enroll in a first aid course today so that you will learn how to properly manage these symptoms.

You can apply paste on the site of the mosquito bite to minimize the itchiness and speed up the recovery process. All you need is a teaspoon of water and a teaspoon of dry meat tenderizer that will be applied on the bite site several times in a day until the symptoms subside. Take note that this remedy can reduce the itchiness and curb down the urge to scratch which can prevent bacterial infection from developing in the skin.

Diphenhydramine is basically an oral antihistamine that can be utilized in order to minimize the symptoms linked with bites by mosquitoes. The medication usually works by reducing the histamine which is a chemical signal that triggers redness, swelling and itchiness as a response to the mosquito bite. Once histamine is blocked, it results to the reduction of these symptoms. Diphenhydramine can also cause drowsiness which can impair the ability of the individual to operate heavy machinery or drive.