What to do for knee pain after using an elliptical trainer?

An elliptical is considered as the solution for individuals who require a low-impact cardiac workout during the recovery period from a knee injury or as an ideal method to cross train to allow the knees a hiatus from high-impact workouts. In some cases, an individual suffering from cartilage breakdown below the kneecap will surely benefit from an elliptical.

Just remember though that the biomechanics of these devices simply indicates that they are not suitable for the knee in all scenarios. Using an elliptical might lead to or even aggravate knee pain in some circumstances.

The muscle strength and knee joint function are vital factors to be considered if the individual wants to avoid aggravating injuries during the rehabilitation period. If there is muscle imbalance in the thigh and hip, he/she is at risk for ending up with knee pain when the elliptical is used. 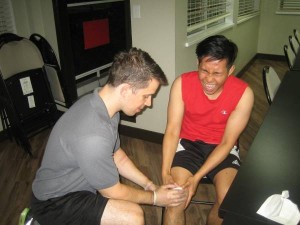 The exact cause of the knee pain might be engaging in a workout routine too strenuously.

If an individual is suffering from patellar tendonitis, the use of an elliptical can aggravate the condition and this can be felt as pain while the machine is used. Take note that this condition affects the tendon that connects the shinbone and patella.

The patellar tendon assists the muscles in extending the lower leg such as when pushing on the elliptical pedals. The initial symptom of this condition is usually pain that can be piercing during activity. In most cases, the initial pain is likely to manifest during or right after a workout. Remember that the pain is likely to intensify with the exercise intensity. As the condition progresses, the pain might be present before, during or after the workout.

The exact cause of the knee pain might be engaging in a workout routine too strenuously. In case the pain occurs right above the kneecap, the individual might have an overuse injury specifically quadriceps tendinitis where the tendon that attaches the quad muscles to the femur is swollen. Remember that this overuse injury is quite common among individuals who start an exercise routine abruptly without building up a fitness base and among those who perform a high-intensity interval training on the device.

Once pain is felt on the outer part of the knee, it might be an overuse injury known as iliotibial band syndrome. This is triggered by friction of the band over the knee and hip joints while running or performing repetitive movements.

The artificial movement of the elliptical can disrupt with the natural biomechanics and can lead to injuries such as a knee strain. In case the base movement is inconsistent with the natural motion of the joint, this can put extra stress on the joints. The artificial pause in the downward motion of the leg can also trigger out of sync hip and knee joint movement which leads to higher stress on the knees. A stationary bike that has a stance that is too wide is likely to throw off proper biomechanics and forces the individual to take unnatural strides that strain on the knees.